* AND A BIG HELLO TO HYSTERIA WEEK

28 radiation blasts down, 2 to go! The finishing line is finally within touching distance...yikes.
As these last few days have crept ever nearer, I've noticed that I've been increasingly pinballing between a sense of massive euphoria that I'm nearly done followed by a heart-stopping little panic at the thought of having to re-introduce myself back into normal society.
The merry-go-round of treatment and specialists and dramas and drugs over the last 8 months, whilst overwhelming at times, has also unwittingly provided me with a little protective cancery cocoon. It's strange and even a little sad to think that from Tuesday, I won't have to traipse up to the hospital, skinny latte in hand, for my daily dose of radiation from Sunburn Steve.
I've got quite used to sitting in the radiotherapy waiting-room, reading my book or watching eye-wateringly bad infomercials for life insurance on TV. I've also met some good people over the last 6 weeks, some of whom are dealing with far more dire situations than mine - if you want to get some perspective on the important things in life, then a radiotherapy waiting-room is the place to hang out, kids.
I've become so used to being monitored and checked and prodded and MRI'd and asked how I am that I feel almost institutionalised by the non-stop care I've received this year. Imagine, if you will, Morgan Freeman in Shawshank Redemption, finally being released from prison after 25 years and standing on the street, wondering what to do next. I'm a bit like that, but with less bouff. And younger. And more importantly, not a murderer.
Rubbish analogies aside, I'm definitely hitting what I like to call the Hysteria chapter of this cancery tale. This is the part where rationale goes out of the window and batshit crazy VC turns up, shouts a lot and then sulks in the corner, rolling her eyes like a pre-pubescent teenager.
This week I had to go for my final visit with Dr Dear to chat about the lovely hormone drug I have to take for the next 5 years. Unlike the radiotherapy waiting room where there's no phone signal so I am forced to read a book or watch adverts for life and funeral insurance, there is more phone signal than you can shake a stick at over at Dr Dear's place. As it turns out, phone reception, access to the internet and a 30 minute wait during Hysteria Week are not a good combo.
To give you some context, this week I have largely (and wholly irrationally) been stressing and obsessing over the rate at which my hair is growing back. It's been 7 weeks since my last chemo sesh and my hair is definitely growing back. Bless the Bouff. It's been through a lot this year. It's coming back very blonde (or grey, depending on my optimism levels) but it's coming back. These are the facts. However, I relay this information to you from the cosy Armchair of Common Sense that I'm now thankfully relaxing in.
Earlier in the week however, while languishing in the Rollercoaster of Negativity at the peak of Hysteria Week and sitting in Dr Dear's chemo waiting room surrounded by people wearing beanies, I became convinced that actually it wasn't growing back at all. And as a result of it not growing back properly, I would clearly be forced to spend the rest of my days wrestling with a transparent and thinning strawberry blonde combover, looking like a horrifying cross between Donald Trump and Benjamin Button. I would never enjoy absent-minded ringlet-twirling again, I'd be forced to wig up forever and I would definitely never find a willing father for my frozen octuplets.
So, faced with this hideous prospect, I'm ashamed to say I broke my own golden rule and frantically googled 'how long till hair grows back post-chemo?'. Oh dear. 30 minutes and multiple forums later with the unwanted advice from the likes of Janice in Colorado and Helen in Northumberland ringing in my ears, I was resigned to my inevitable fate as a 42 year old woman with permanent male pattern baldness. Blimey.
5 minutes later and I was slumped in a chair in Dr Dear's office with my arms folded, sulking about my male pattern baldness while she told me all about the side effects of the hormone drug I have to start following the end of radiation. Normally, I tend to zone out during side effect chat but this time I was listening intently and waiting for her to mention 'hair thinning' - Janice in Colorado on the Forum of Doom had informed me that this hormone drug also causes hair-thinning, just to add to my Hysteria Week woes, so even if the Bouff comes back it will drop off instantly.

Finally Dr Dear finished the side effect chat, at which point I triumphantly brandished my 'a-ha! you missed out hair thinning!' card. She looked at me like I was quite mad, at which point I confessed I'd spent 30 minutes Googling like a madwoman in her waiting room. There is nothing a medical professional hates more than a Googler but good old Dr Dear hid it well. Even when I whipped old Wiggy off and forced her to give me her honest opinion on my hair growth, she gently reassured me that all was well and that the Bouff is clearly and slowly but surely on its way back to the Connerty head.
Hysteria Week has now thankfully drawn to a close but it's made me very aware that as the final day of treatment approaches, the real test will begin. Navigating the treatment itself and keeping a calm head over the last 8 months has been challenging but holding a steady course and staying mentally on top of my game now I'm 'fixed' will,I think, be the true test.
My acupuncturist (yes I have one of those now too) asked me this week, while he stabbed my numb foot repeatedly with needles, if I thought this year had changed me at all. Initially I said no. I told him that I felt the same, this year hadbeen utterly surreal, my perspective on certain things had definitely changed but fundamentally I was the same person. Then I went away and thought about it some more and now I'm not so sure.
You can't submerge yourself entirely in this cancery world for months on end, look behind the curtain, see all there is to see, experience all there is to experience and then walk away, unchanged and unaffected.
That doesn't mean I have to or want to spend the rest of my days talking about cancer or thinking about cancer or writing about cancer but it does mean that, thanks to this mad year, I don't sweat the small stuff as much as I used to. It does mean that I value family and friendship even more than I did and it does make me nauseatingly grateful for the smallest things, such as being able to hold a pen and write my own name again!! Wahay!
On Monday, after my last radiation, a few of us will have a little celebratory breakfast and wave goodbye to the last 8 months. There will most certainly be tears as I'm welling up even thinking about it (!) and we will draw this ‪#‎radiohead‬ chapter to a close.
Special thanks to all those tremendous friends and family who got me through Hysteria Week, and shout out to my buddy Lou whose wise words (and gorgeous daughter shouting 'I wuv you Vicki' in the background of our call) got me back on the straight and narrow.
See you at the finish line, my friends. Phew. :)

Love,
VC x
P.S As you can see from the pic, I'm so nailing this floristry shizzle... 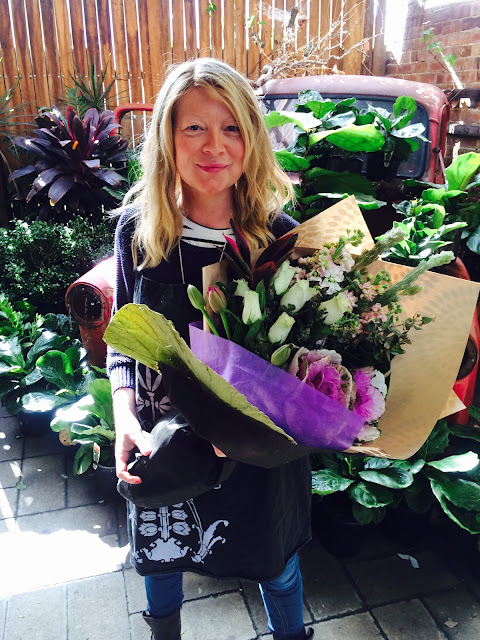