So today we have officially reached radiation halfway house - 15 rounds down, 15 rounds to go and as Sunburn Sue said this morning, the countdown can now commence!
Not wanting to tempt fate but I'm faring pretty well with the radiation, despite my sunburn-prone, factor 30-loving Celtic complexion. Had my Monday morning check-in with Sunburn Sue this morning which went well - I shall miss my weekly catch-ups with Sunburn Sue.
She once described me to an MRI colleague on the phone while I was sat in her office as "Connerty, 42, right breast, dead arm, sharp as a tack" and, having basked in the warmth of her high praise, I have wanted to continue to impress her with my feigned sharpness ever since. I also want that entire description added to my business cards but I'm not sure work will go for it...
For the last couple of weeks I've had no physical indications whatsoever that I'm even having radiation, to the the point where I've started wondering whether Sunburn Steve has actually switched the machine on or not or whether this is all just an elaborate wind-up. However, the fact that he ducks out of the room quicker than a rat up a drainpipe once I'm all set up makes me think that he probably knows where the ON button is. I do find myself lying there for 6 long minutes slightly unnerved by the thought that this treatment I'm willingly exposing myself to every day has people literally leaving the room, slamming the doors and running for cover. Yikes.
This morning, in my efforts to further gain approval from Sunburn Sue and avoid her slightly disappointed face when I tell her each week that I'm still fine, I proudly showed her a bit of redness on my chest which I, being British, of course blamed myself for:
"Look at this Sue, it's all my fault, sorry, I had radiation the other morning, then I applied some moisturiser and now I'm so sorry but it's gone a bit red. Sorry".
Sue was unashamedly delighted and proceeded to wave my apologies aside, saying that in fact it was she who really should apologise for giving me radiation in the first place. So I then graciously accepted her apology for giving me radiation. Meanwhile, the intern who was witnessing this bizarre apologetic exchange just sat there, looking confused about why everyone in the room was so sorry.
Sue was so openly thrilled to finally see physical evidence that her precious radiation was hitting exactly where it was designed to hit that I wondered if she'd actually had a discreet word with Sunburn Steve about whether he was indeed switching the machine on properly or not. And with that, she gleefully typed 'Level 1 skin damage' into my records and off I went in search of some super-strength Aloe Vera lotion...
As this cancery chapter draws to a close in exactly 3 weeks and as I literally limp towards the finish line (thankyou, numb foot), I've started to become more aware of the overall physical toll this year has taken on the Connerty body. Currently, I feel a bit like Rocky Balboa after ten rounds - battered, bruised and knackered but ultimately pretty happy to be emerging from the ring relatively unscathed.
Until this year, I'd successfully managed to evade any real illness dramas or broken bones throughout childhood and adulthood. I tore some knee cartilage about ten years ago, defending myself from a tiny, angry teenage kickboxer - long story but he was clearly in need of some parental discipline and a good roundhouse kick...
Then I tore some ligaments in my ankle falling down some stairs just a few weeks later - who switches ALL the lights off during a pub lock-in for goodness sake? But other than that, I've simply looked on sympathetically and somewhat smugly as my siblings and friends fell out of trees, tripped over tennis nets, landed awkwardly going up for that easy ball etc...
As a result, having been genuinely shocked in January to discover I wasn't in fact invincible, immortal or superhuman after all, I've spent most of this year being initially aggravated, then amazed and ultimately humbled by the sheer resilience of my own little body in the face of surgery, dead arms, numb feet, ringlet loss, hormone injections, egg-freezing, icy gloves, chemotherapy and now radiation. Every step has at times seemed insurmountable but every time, whilst I've been grumbling away about needing a rest and a cup of tea, my body has just ignored me, rolled with the punches and got on with the job.
So I might well come limping through Heathrow Arrivals doors in exactly a month's time, all wigged up with a wonky arm but I guarantee that, despite being squashed into Economy for 24 hours, I'll still be the happiest compression sleeve-wearing, sleep-deprived fool on that plane...
Special thanks this week to my favourite lads for an awesome weekend away in the beautiful Aussie spa town of Daylesford - not much beats great chat, log fires, pub lunches, long walks, ceramic chickens, cheeky reds, winning the 3rd Ashes Test and sitting in a hot mineral spring with a bald girl…. :) 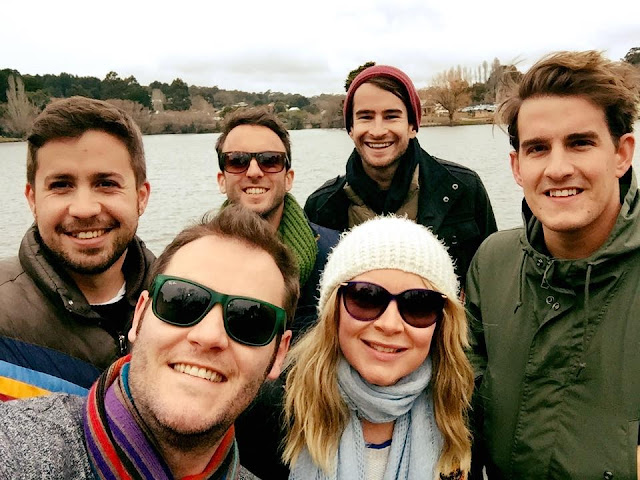